August saw stock markets continue to reach new highs in a record-beating earnings season and despite the far-reaching spread of the Delta variant raising concerns that global growth may have reached its peak and could fall back from here. US stock markets gained a couple of percentage points during the month, with the Dow Jones Industrial Average advancing 1.5%, the S&P500 up 2.6% and the Nasdaq leading the way, gaining 3.1%. The UK FTSE 100 and Eurostoxx 50 experienced similar increases of 1.7% and 2.5% respectively.

China’s CSI 300 Index still managed to eke out a 0.4% gain during the month notwithstanding the regulatory clampdown that sent its tech and online education stocks spiralling lower. For the year, however, it is one of the few stock markets in the red, off almost 8% for the first eight months of the year. 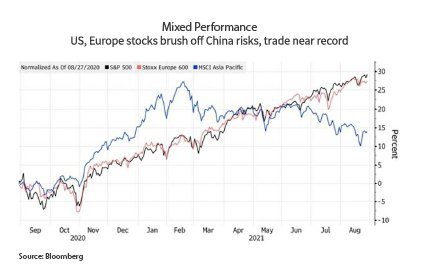 In the US, consumer confidence took a big knock but this had little effect on the US stock market indices, which continued to reach new highs. The S&P 500 forward P/E, which captures investor expectations 12 months down the line, remained elevated at 20.9, indicating that investors continue to anticipate strong earnings growth. 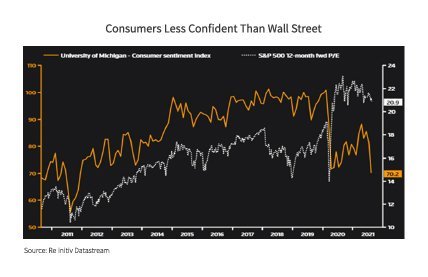 The impact of the Delta variant started to be felt during August, with the rollover of PMI’s and Citibank’s Global Economic Surprises Index, which reflects whether data is outperforming or underperforming forecasts, turning negative for the first time since mid-2020. 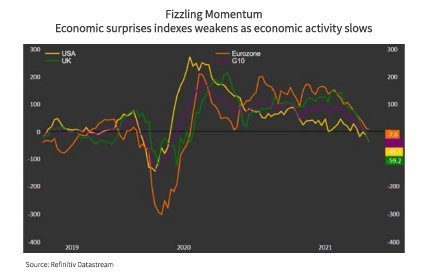 A cause for concern is that zero-Covid economies such as China, Singapore, Taiwan, Australia and New Zealand, which have tried to completely stamp out the virus, have seen a renewed rise in infections. This has undermined confidence that the virus will ever be completely vanquished. A growing pool of expert opinion suggests it is likely to become endemic, much like the seasonal flu, and that we will have to learn to live with it.

Recent PMI data released by the National Bureau of Statistics show that China, where outbreaks of the virus have been strictly managed, has seen economic activity slow. The services sector has fallen below 50 for the first time since the first quarter of last year, signalling a contraction, and its manufacturing sector and export orders declined. 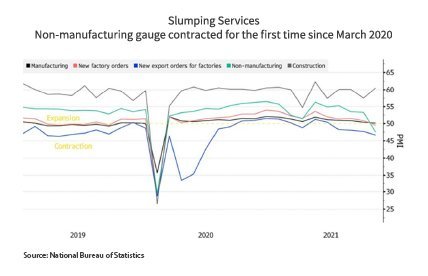 The perplexing decline in US bond yields continued into August, with the US 10 – year Treasury yield remaining below 1.4%, having traded at 1.75% at the end of March.

During August, the world’s benchmark interest rate started out at 1.17%, reaching a high of 1.367% around mid-month before ending August below 1.3% again. 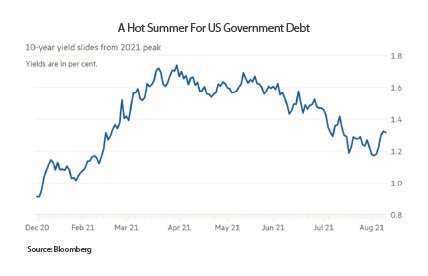 The dip in yields is attributed to concerns about slowing growth and uncertainty about whether the US Federal Reserve will begin tapering off its bond buying programmes later this year or next year. At the much-anticipated Jackson Hole Symposium towards the end of the month, Chair Jerome Powell managed to keep investor sentiment on an even keel by acknowledging that tapering may begin later this year but that it will be conducted cautiously and carefully.

US stock market investors took the news in their stride with stock market indices again reaching new highs by the end of the week, while the US Treasury yield ticked up from its mid-month lows. Expectations of the 10-year treasury yield reaching 2% by year-end are no longer commonplace, although some market commentators do think it is still possible. According to FactSet data (which shows the average forecasts of analysts last month), the 10-year yield was expected to rise to 1.8 per cent by the year-end from 1.31 per cent.

So what does this tell us about the prospects for the global economy and markets? In the first quarter of this year, yields rose on inflation fears. In the second, they fell on concerns of slowing growth. Two months on and investors are still harbouring concerns about growth and investors still seem appeased by Powell’s commitment to address inflation as and when needed.Perhaps it merely highlights the sensitivity of rates to prevalent investor sentiment.

Despite the fall in yields, there is widespread expectation that inflation is not going away quickly. Labour markets are improving, the US economy is still booming and interest rates at current levels are not compatible. Consequently, direct equity exposure in the New Horizon Fund has been added in Swiss-based logistics company Kuehne + Nagel which is set to continue benefiting from considerable pricing gains. It is the largest sea freight forwarder globally, the second largest in air-freight and posted Q2 results ahead of both consensus estimates and previous management targets. 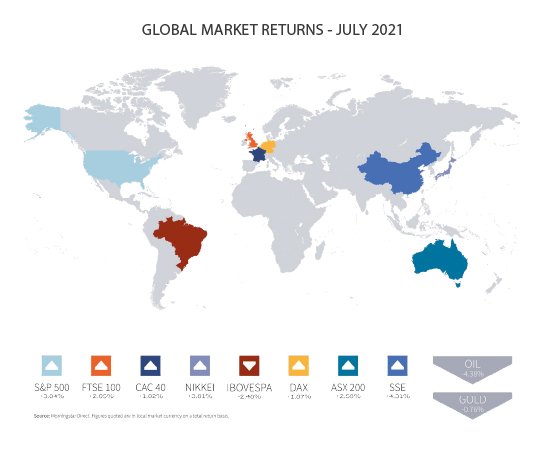